Looking for the printable PDF version of this document? 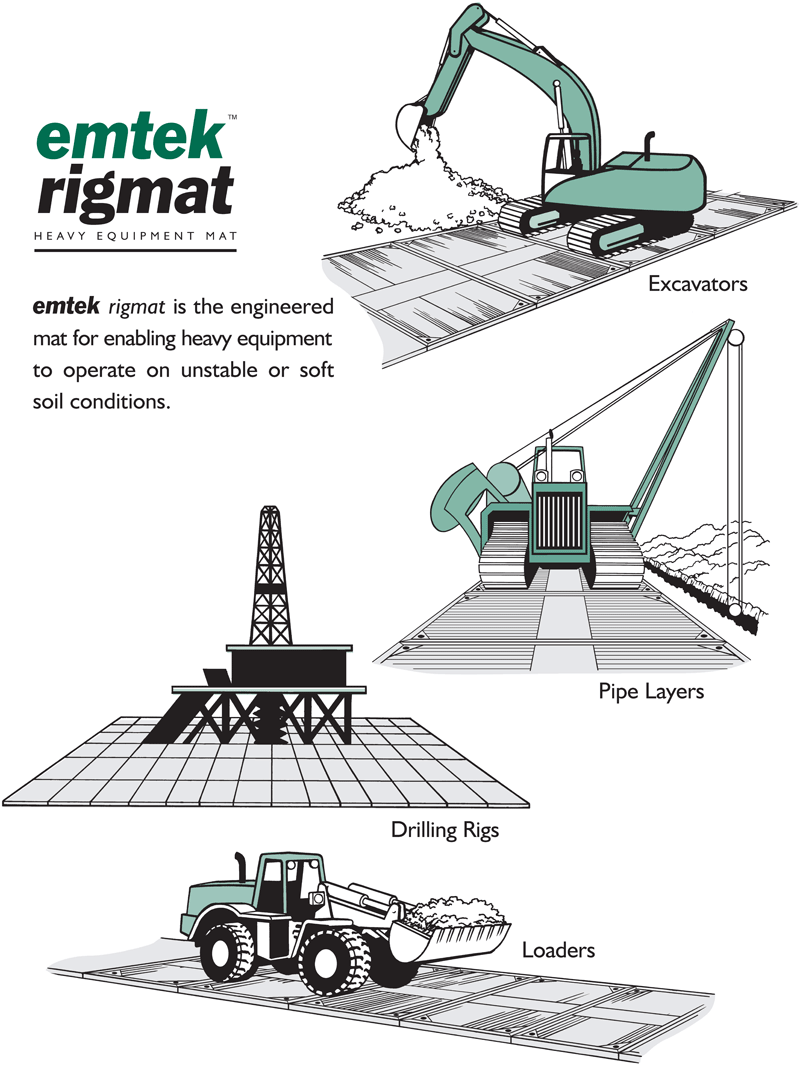 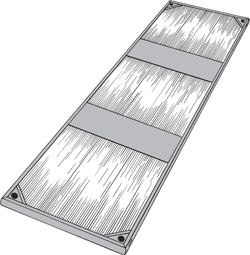 This Design Guide is intended to provide design information to enable you to determine how emtek rigmat can best serve your needs. Anthony Hardwood Composites’ emtek rigmat is an engineered, laminated wood mat that is made from indigenous Southern hardwoods in Sheridan, Arkansas and then framed with a 1/2″ wall formed channel. By protecting the emtek core from handling abuse, the emtek rigmat will provide longer and more consistent usable mat life.

emtek rigmat is engineered to withstand the abuse of today’s industrial construction sites. Control of raw material density in the manufacturing process ensures that emtek rigmat has a hard, impact resistant surface. The laminating process creates a composite structure that resists fracture.

Predictable, reliable strength is a necessity when the safety of workers and equipment assets are at stake. Patented construction creates a work platform that has engineering design values that exceed all sawn woods identified by the National Design Standard (NDS 2004). Every emtek rigmat component is proof loaded by machine to ensure that the finished mat will meet the strict design criteria and quality standards established by AHC.

emtek rig mats are valuable to the contractor, and proper storage can extend the service life for many years. Product should be stored in an environment with good drainage. Stacking mats with stickers between layers provides an avenue for air movement that can reduce the effects of decay caused by prolonged exposure to moisture.

Wood is a natural polymer that exhibits good resistance to chemical exposure; however, extended contact with strong acids (ph<3) or strong bases (ph>9) can cause wood to degrade and compromise the structural integrity of the product. The resins used in emtek rigmat construction are thermoset polymers that are highly resistant to chemical attack and will degrade slower than the wood when exposed to high chemical concentrations. Chemical MSDS sheets should be referenced if the product’s exposure is suspected.

Prolonged exposure to temperature above 150° F can cause the wood to degrade and should be avoided to ensure that the product performs at the designed levels.

How to Use this Guide

How to use this guide…

emtek rigmat mats are essentially our standard emtek mat framed with steel for added durability. Like our standard emtek mats these are engineered to support specified loads. The tables in this guide show allowable loads. These loads are based solely on the strength of the emtek billets within the frame. No strength has been associated with the steel frame in the following allowable load tables. This is because the distance between steel members is too great to assume that loads can be effectively transferred from one steel member to the next with a moving load. Each rig mat has been proof loaded to 1.5 times the allowable load at the manufacturing facility to certify these values.

It is important to note that the loads are associated with one foot of mat width. If the footprint of the tire is 2′ long then the allowable load can be multiplied by two. This is especially important when considering applications for tracked vehicles that can distribute loads along track lengths up to16′ or longer.

The tables show different deflection preferences. If you would like to see no more than 2″ of deflection on the matted surface the lower rows of each mat size should be considered. If a deflection up to 4″ is acceptable, then upper rows and the associated higher loads can be considered. In some cases loads are limited by the strength of the product, and maximum deflections are not allowed. In this case the deflection at the maximum allowable load is indicated.

Certainly construction applications with heavy equipment will result in unique loads and loading configurations. If you have any questions regarding your unique situation please feel free to call us at 870-942-4000.

The design properties and strength characteristics of the emtek product are verified at the time of manufacture. During the service life of the product, use conditions will reduce the load carrying capacity of the product. If there are any questions as to whether the strength of the product has been compromised during handling, storage, aggressive use, etc., please feel free to contact us so we can help assess any potential degrade. 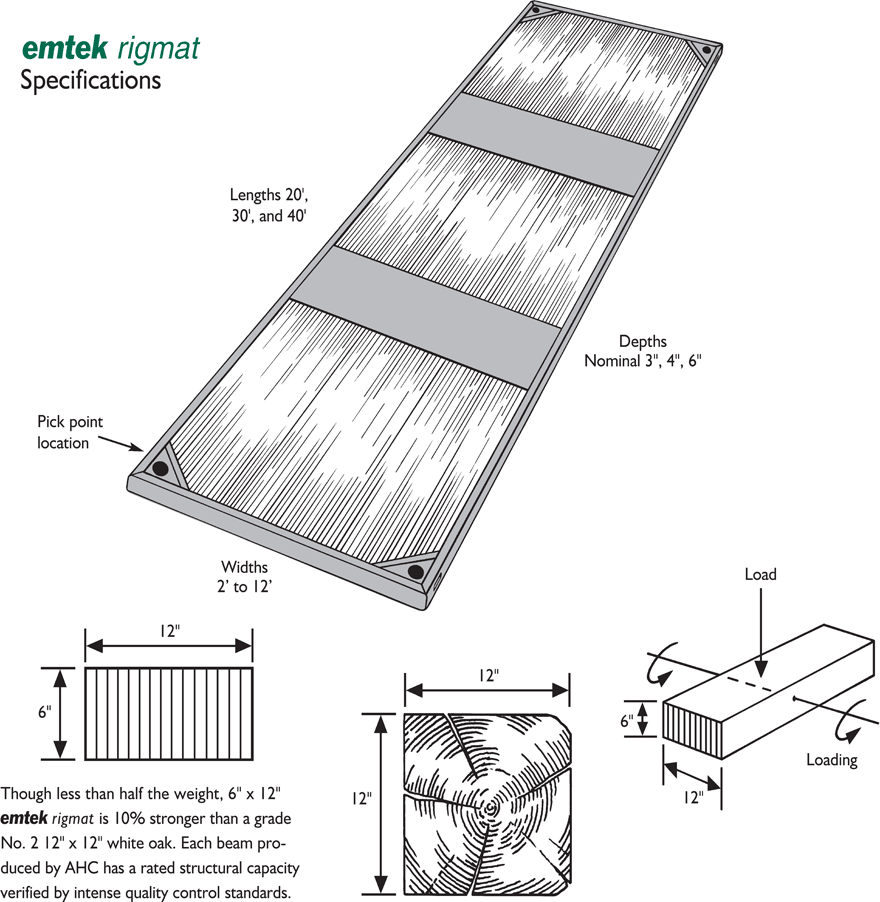 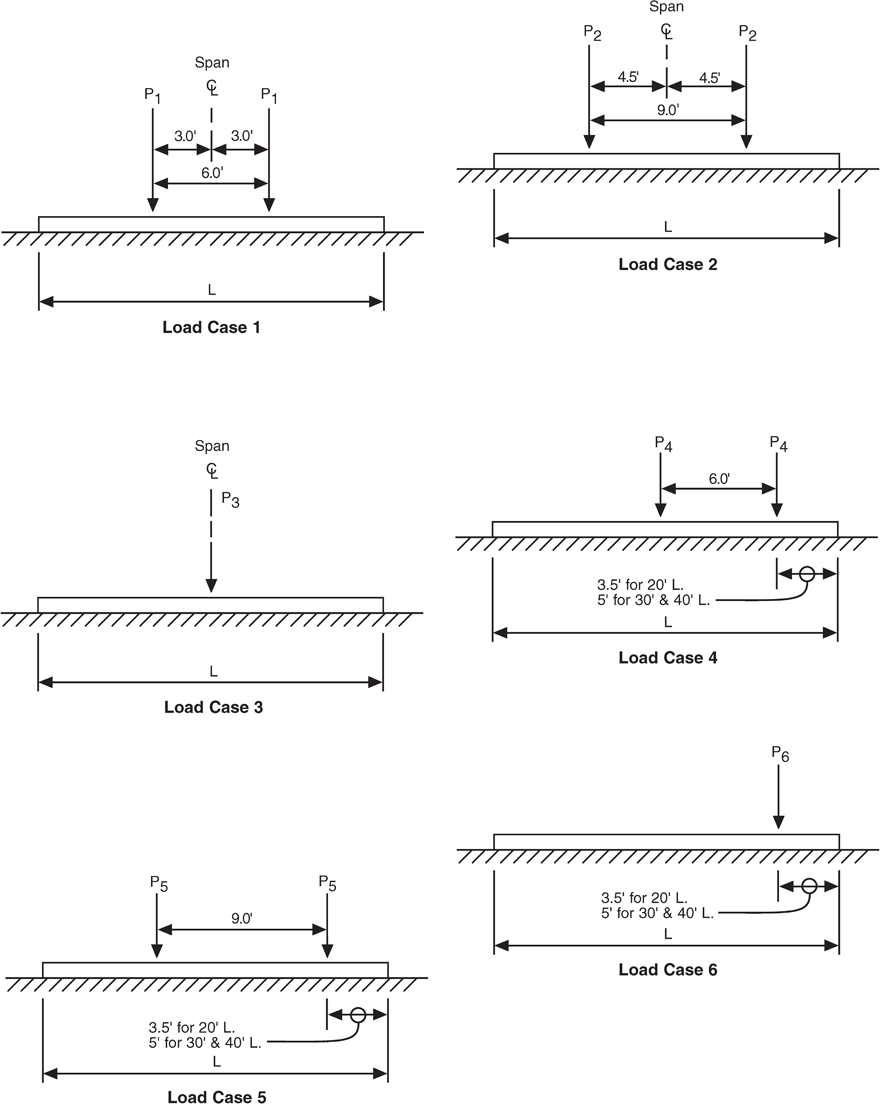 Load tables are subject to interpretation and use for a variety of conditions. For load cases where uniform bearing is used: first the soil strength should be estimated and then using the tables for the various soil types and the load case that compares closest to the load conditions, the thickness and length can be selected; alternatively, for an existing thickness and length the estimated load resistance can be determined from the Tables.

For estimating soil strength using simplified bearing tests as described above, results should be based on incremental loads. Divide the resulting pressure in pounds per square inch by the settlement, and the results averaged to determine an estimated SGM.

For areas where geotechnical reports are required the geotechnical engineering should be requested to provide an estimated bearing capacity of the bearing strata, and if practical, in the form of subgrade modulus for settlement estimated in the range of one to two inches.